Thicket restoration by planting of spekboom cuttings in the Eastern Cape has, in some cases, been quite unsuccessful.

In some areas a dense canopy cover of spekboom now thrives, with thicket biodiversity returning of its own accord. However, just a short distance away one might only find a handful of stunted survivors, barely clinging to life in an area with seemingly identical environmental conditions.

Why this happens is a question that has left many feeling that "spekboom planting for thicket restoration is an expensive waste of time". This really is not the case, it's just that we have been somewhat forgetful and a bit hasty.

So why do some spekboom die, while others thrive a short distance away?

Well, a fact that is often overlooked/forgotten, is that spekboom really doesn’t enjoy the cold.


For spekboom, those calm starry winter nights in the mountains that might make such great photographs of the Milky Way are an absolute nightmare. If temperatures fall near 0°C, spekboom is in real danger, and even a light frost can wipe out hundreds of cuttings.
So frost kills spekboom cuttings.


It's easy to find out really, because there are some classic symptoms:


How to plant spekboom in the right spot to avoid frost damage and restoration failure?
Simple. Don’t bother buying frost netting and trying to come up with fancy techniques, just take heed of the following three principles.

1) Avoid valley floors and flat areas.
Why? Because cold air pools (Figure 2). Cold air is denser than warm air, and on calm starry nights in winter, will flow downslope and accumulate on valley floors and in flat areas (often called frost hollows). This is where frost will wipe out your restoration efforts (Figure 3a & b).


In summary, plan before you plant!

Don't plant on valley floors and flat areas (and sometimes even on gradual slopes), and use nurse plants as much as possible!
Posted by Unknown on Monday, May 16, 2016 No comments:

The wondrous world of Independent Contrasts

In my recent efforts to understand Phylogenetic Independent Contrasts (PIC), I came across a lecture that was done by the man who proposed the method himself, Joe Felsenstein. So who better to explain the method than the creator himself? PIC is a comparative method that statistically compares traits between species or clades by using phylogenies. However,  this poses a problem: how can one compare traits in an independent manner when phylogenies are hierarchical? The answer: you cannot. As Felsenstein explains, it creates biases in the statistical analyses and although it seems like one is comparing traits individually, you are not. As a response to these faulty comparative methods, Felsenstein created a method that takes into account weighted differences of branch lengths to calculate a variance of each trait. Because the branch lengths are taken into account, non-independence of species is circumvented. The phylogenies are assumed to work under Brownian Motion i.e. the probability of  a trait to move upward or downward in a tree is the same and traits evolve in a linear manner.

Figure 1:  PIC explained graphically. The  differences in distances  between branches of nodes are calculated using the Brownian Motion model. These values are then used to plot the differences between traits and a regression can be calculated. (http://www.life.umd.edu/classroom/zool360/L5_evolution/img023.gif)

The algebraic side to PIC is a little more complicate than what has come across in my post, but the idea is "fairly" simple. PIC's are highly useful in evolutionary biology and one can find correlations between traits and the environment through evolutionary time. Its kind of ... magical.
To understand PNC in a more in depth manner, I have attached the link to the lecture conducted by Felsentein. The lecture is 59 minutes long, but it is worth the watch.

Prepare to be fascinated.

I remember as a child, fascinated by all things non-human, collecting garden snails in my little glass terrarium. I would throw in a bunch of lettuce leaves and spend hours watching the snails glide around the slime-streaked glass, with their strange eye-stalks contracting and extending like a cheerleader’s arms in slow motion. Occasionally, I would stick my finger out and tentatively touch an eye – and jump ever so slightly when the eye disappeared into the snail’s gelatinous head. What had prompted the snail to retract its eye? Was it afraid of me, or had I possibly hurt it? Might I have threatened our burgeoning friendship? What was it thinking?

To this day, as an adult, I am still fascinated by animal behaviour, cognition and consciousness. What I had never considered, however, and what struck me this morning while I scanned Science Daily’s “Behavioural” section, was that behaviour isn't limited to the animal kingdom. I read, with my mouth slightly ajar, about a unicellular protist that displayed evidence of habituation – an unmistakable, if rudimentary, form of learning. 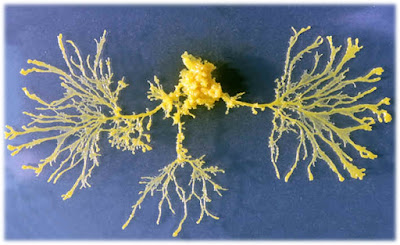 Plasmodium of Physarum polycephalum on water agar in a Petri dish after about four hours at room temperature. https://www.uoguelph.ca/~gbarron/MISCE2002/plasmppa.htm

The original paper was published just a couple of days ago in Proceedings of the Royal Society of London B. Boisseau et al. (2016) barred the slime mould cells’ passage to a food source with a bitter, but unharmful substance, and showed that, while initially hesitant to move through the threatening substance, they moved with increasing speed after “realising” that the substance was harmless. Within six days, they were behaving in the same way as the control group. Two days after removing the chemical obstacle, the cells once again became “distrustful” of the substance. I had to know more. A cursory search of the recent literature was edifying – this particular species has been shown to optimise its nutrition when given the choice (Dussutour et al. 2010) and solve mazes (Nakagaki et al. 2010) using Hansel and Gretel’s bread crumb approach (substitute bread crumbs with a trail of slime). They also form complex, interconnected networks of slime between food sources which allow them to move between these sources at maximum efficiency – to the point that researchers are suggesting they be utilised in the future planning of transport systems (Adamatzky et al. 2016). This particular species has also been shown to foresee predictable changes in its environment, and prepare for them physiologically in order to prevent unnecessary energy expenditure (Saigusa et al. 2008). Incredible. And here I sit in the office in winter, shivering and expending way too much energy because I once again forgot my jersey at home. Perhaps it’s time we stop considering intelligence to be synonymous with a nervous system.

If a single-celled Protist can accomplish so much, I imagine that certain highly complex, multicellular, but seemingly behaviour-less organisms might hold a wealth of secrets hidden away from the observer’s keen eye. After everything I've read today, I think it’s high time I explored the hitherto unknown (by me, anyway) field of plant behaviour.. Stay posted.